Home Books War is a Racket (1935) by Smedley Butler 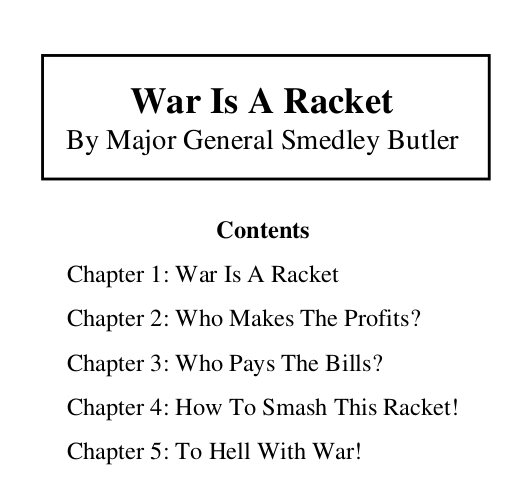 Classic anti-war pamphlet by a retired U.S. major general who reveals the truth about war from his own experiences and observations fighting around the world, and expose American Corporate Imperialism. Butler said, “I served in all commissioned ranks from second lieutenant to Major General. And during that period I spent most of my time being a high-class muscle man for Big Business, for Wall Street, and for the bankers. In short, I was a racketeer for capitalism. I suspected I was just part of the racket all the time. Now I am sure of it.” -

Chapter 1: War Is A Racket
Chapter 2: Who Makes The Profits?
Chapter 3: Who Pays The Bills?
Chapter 4: How To Smash This Racket!
Chapter 5: To Hell With War!